This is piece is a guest blog from Shelly Roder and John Celichowski in celebration of World Animal Day. It was originally posted on World Animal Day, 2011 on the Endangered Species Coalition’s website.

Many backyard gardens feature a statue of a slight man dressed in rags. His sinewy and outstretched arms form a perfect perch for a bird or two. A rabbit and sometimes even a wolf are often shown sitting at his sandaled feet. The man is Francis of Assisi, the patron saint of animals and ecology, who died 785 years ago this October 3 at age 45.

This weekend many churches throughout world, Protestant as well as Catholic, will celebrate the legacy of St. Francis by opening their doors to bless Fido, Fluffy, and friends. It is a sweet ritual, this blessing of pets from goldfish to pot-bellied pigs. For many, however, this custom begs the question: What is the connection between an itinerant medieval preacher and ascetic and house pets and gardens?

Francis had a vision and spiritual understanding of creation that was radical for its time and in many respects remains so today. A son of the city of Assisi as well as the verdant Umbrian countryside that surrounded it, Francis expressed his deep devotion to the earth and her creatures b 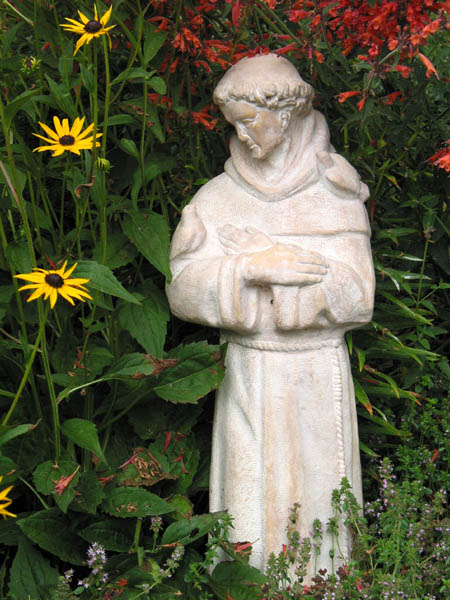 y preaching about them as part of a larger communion that reflected the goodness, love and power of their Creator. Francis taught his followers that human beings are brothers and sisters not only to each other but to the sun, moon, fire, wind, water and the animals, too.

Francis taught that because of our profound relationships with Brother Sun, Sister Water and others, we are required to repair any ruptures that exist in those relationships. One story recalls how Francis brokered a deal between the people of Gubbio and a wolf whose severe hunger led him to threaten the townsfolk and eat their livestock. The people agreed to feed Brother Wolf in exchange for his protection. Peace ensued as their terrorist became their guardian and friend.

Nearly eight centuries later we frequently hear about the ways in which our relationship with our sister, Mother Earth, is suffering. Oil spills from the Gulf of Mexico to the rivers of Montana and Michigan threaten water, fish, birds, shores, and livelihoods. Carbon emissions from fossil fuel diminish the quality of the air we breathe and contribute to climate change. Human well-being and the lives of many species are at-risk because of our broken relationship with creation.

As Franciscans, we believe that we can work to mend these relationships by driving our cars less and using public transportation more; eating locally produced foods; buying less and reusing more; investing in energy-saving appliances and devices, and recycling. This conservation makes even more sense as tens of millions of our fellow Americans living in a shaky global economy and at a time of high unemployment are trying to do more with less.

At the same time, we can encourage our elected officials to be Franciscan conservatives as well as fiscal ones and to be as concerned with protecting and conserving our natural resources and wildlife as they are to the bottom lines of their corporate campaign contributors. This year on the feast of St. Francis of Assisi we have just such an opportunity.

A proposal pending approval by President Obama would allow the construction of an oil pipeline through sensitive habitats from Canada to the Gulf of Mexico. The Keystone XL Pipeline, would trace the same route used by migrating Whooping cranes, one of the world’s most endangered birds. Sister Whooping Crane, along with as many as 10 other imperiled animals would suffer if the pipeline is approved . The President will decide soon. Meanwhile, Congress is considering an unprecedented number of attempts to weaken the Endangered Species Act, the safety net that has successfully protected the bald eagle, the gray whale, the Florida panther and many more from the brink of extinction. We hope that the President and Congress will consider the teachings of St. Francis in making their decisions.

On the feast of St. Francis, as many get their pets blessed at local churches we hope that you will also extend a blessing to those animals who are threatened with extinction by doing your part to protect their habitat. Economic development and energy independence inevitably demand some trade-offs. With courage, creativity, and commitment they need not also demand selling out our brothers and sisters.

Shelly Roder is the Co-Director of the Capuchin Franciscan Volunteer Corps (Cap Corps). She lives in Milwaukee with her husband, Joe Halaiko, and children Sylvia and Jacob.

This site is an initiative of the Endangered Species Coalition and its member groups.